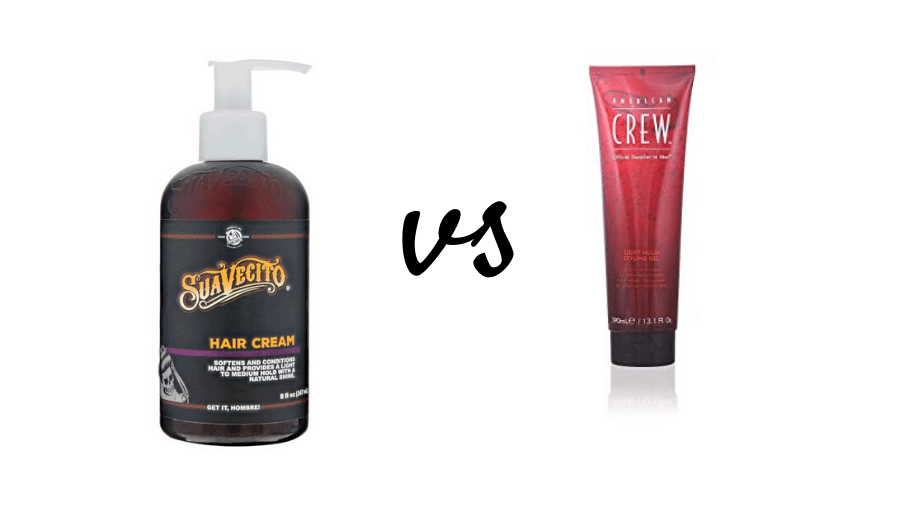 I know a lot of people are searching for American Crew vs Suavecito.

If you’re reading this, then you’re one of these people. Although American Crew and Suavecito are not as popular as others like Nivea, Cetaphil, Aveeno, etc.

However, they have stunning products that are not just popular but well received by users. Take their pomade products for example.

Here is the deal:

Both brands have hundreds (one is thousands) of reviews with the majority being positive. This means a lot of people are using the products and many are learning more about them.

In this article, I’m not going to be taking you through their popular products.

You’ll learn everything you need to know about the product so you can choose the one that’s suitable for you. But first, let’s talk a little about both brands since they’re not very popular.

Note that popularity does not equal quality. Do you know? Even if a brand is not popular, I don’t mind as long as they serve me products that work.

It’s a good thing to keep in mind as you read this article!

Suavecito and a Brief History

Two brothers, Pete and Tony Adame are the fathers that gave birth to Suavecito. The name sounds French-ish, but it’s actually an American brand.

Maybe because it’s dedicated to men’s hair care. Anyway, they’ve been around for a long time and has a variety of products for all hair types.

Their most popular product, like American Crew, is the pomade line. Right now, Suavecito offers a lot of women products through its pomade line and other hair products.

In this article, I’m choosing to call them a men’s haircare brand. If you want brands that’ll serve you better as a female, check our resource here. Of course, stay around if you want to shop for your hobby. I won’t tell on you.

American Crew and a Brief History

Here is some info on AC and how they got started:

American Crew starts life in 1994 when it was launched by David Raccuglia. AC is a men’s hairstyling and grooming brand.

But does that mean it can’t be used by females? No.

Take Nivea for example. They have so many products dedicated to men that you would think they can’t be used by women.

A lot of product from American Crew has similar ingredients to products used in salons and are safe for the hair. However, after checking their history, it’s easy to see they’re men focused.

If you’re a female, you can still use this brand, in a unique way. You can help your partner/brother get the best product from this brand.

If you’re looking for personal hair care products, there are many other brands you can go for. Check them out here.

American Crew and Suavecito are two remarkably popular brands of hair pomades that are used by millions of people every day.

But how do they compare? American Crew vs Suavecito, what’s better? Let’s check and see.

Quick Comparison of AC and Suavecito

The difference between American Crew and Suavecito is that the Suavecito Pomade is shine-free while AC claims to give you a medium hold with high shine.

And American Crew gets your hair in place after making it thicker. Suavecito lasts all day, which is pleasant.

While there are a few hundred reviews on American Crew, Suavecito has received thousands of reviews, meaning they’re more popular.

Finally, for the recommendation:

Choose American Crew if you’re looking for a stronghold but Suavecity if you want creamy consistency for effortless styling.

As a purely water-based pomade, Suavecito is extremely easy to wash out. It’s not “dirty”, so to speak: you can easily remove all of its traces from your hair as well as hands.

Compared to Suavecito, American Crew is oil-based, it contains petroleum-based products like all traditional, old-fashioned pomades do.

Nonetheless, it doesn’t mean American Crew is hard to wash out. The thing is, this pomade contains a somewhat reduced amount of oil, it’s not really oil-heavy.

As a result, it’s not a high hold pomade, but it can also be washed out with ease. Still, when it comes to washability, Suavecito is probably unmatched: it has fantastic washability.

The American Crew pomade has a medium hold. It’s not really a high-hold pomade, so it’s not a good choice if that is what you’re looking for.

Suavecito is said to have amazing hold and works well with different types of hair. Its hold is also very strong, good for thick, unruly hair. Suavecito is recommended for those looking for a high-hold water-based pomade.

American Crew pomades generally have high shine. Users easily notice the shine, though it’s not beyond measure and stays within reasonable bounds.

Suavecito is considered medium-shine, with a characteristic matte look. It’s not high-shine, but not low-shine either.

Suavecito has a strong, noticeable fragrance. In comparison, American Crew is much more benign, more neutral in that respect. In fact, Suavecito is not recommended for people who cannot stand its fragrance.

Some people even complain that they love the pomade, but “absolutely hate” the smell. So it is a matter of trade-offs: you can overcome this particular drawback of the Suavecito brand if you like its qualities.

Here is the kicker:

American Crew is often considered to live up to the standard of true pomades, as it’s manufactured with traditional techniques and has been used for a long time.

Some say that American Crew is rather overpriced for what it’s worth, but objectively speaking, American Crew cannot be considered an expensive brand by any means.

It’s still quite affordable. Suavecito is also considered an affordable pomade brand, which is partly the reason for its widespread use.

In other words, both brands are roughly at the same price levels and belong to the category of affordable everyday pomades.

Read: Is Garnier Fructis Bad for Your Hair? SHM Answers!

Most Popular Posts on the Site

How to Style Naturally Curly Hair (Tips for Beautiful Curls)

Like most consumers I always look at reviews before buying something even more so if the product is worth more than hundred dollar, I’m pretty sure you’d do the same thing too. It always helps in making Read More…