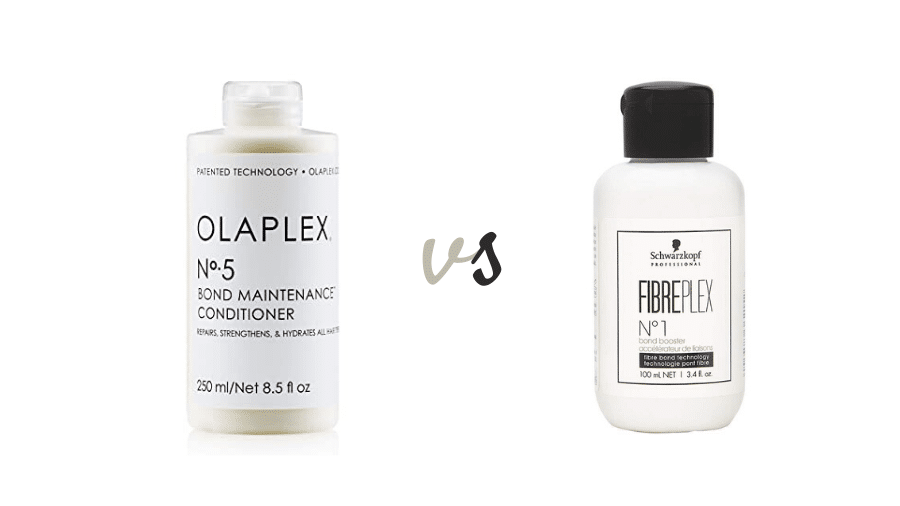 If you’re looking for a comparison of Fibreplex vs Olaplex, then you’re in for a good read…

There has been a lot of debate about which of these products is the best for rebuilding bonds after bleaching.

How do they compare and can they help you go blonde without resulting in horrible breakouts?

To answer that question, there are a few things you to know…

And I’m happy to go over that for you.

If you don’t already know, when you bleach your hair, the developer removes the color pigment from the hair through a process called oxidation.

This process often breaks the inner bonds in the hair. And renders the hair weak.

In most cases, there isn’t anything you can do about that. Even if you’re using the most expensive developer, the hair cannot escape this strain.

Without putting the hair through any treatment, the bond remains broken and the hair weak. This often leads to hair breakage.

What products like Olaplex and Fibreplex do is to strengthen or rebuild the bonds. You use them before or after the perm.

They don’t bleach your hair. That’s not their function…

When applied, these plexes strengthen the bond or rebuild it. This, in turn, keeps the hair strong so the chemical process doesn’t cause too much damage.

Yes, some sort of damage is still going on. However, they’re diminished with the presence of the treatment.

If you already know all/some of these, you can now see the importance of these products. And how you might be tense when trying to go blonde.

Don’t expect miracles from any of these plexes.

They don’t repair or rebuild split ends, for example. And if your hair is severely damaged, you have to go to your hairstylist to help you with a solution.

Applying Olaplex or Fibreplex isn’t going to do nada.

If your goal is to go blonde, know that it involves a lot of commitments, ongoing maintenance, and a strong will.

Manage your expectations. If you expect to get the same results like those you see on TV or commercial adverts, you may be disappointed.

There is more involved than meets the eye!

What to Keep In Mind As You Read this Comparison

Each company claims they’re the best. And that their product is better than others.

The truth is that each product has its pros and cons. You can’t expect 100% benefit with any of them. No product like that exists.

Ultimately, you’ll have to engage in some trade-off, no matter which product you choose to go with.

So with that in mind:

Olaplex is a great option to use when you’re trying to transition from one color to another without causing damage to the bonds.

Fibreplex, on the other hand, maybe more suitable for use during the chemical process. It can provide the right nourishment to power the bond/cuticle throughout the process.

Finally, Olaplex is more expensive than Fibreplex. So, I thought you should know that.

Related: Innoluxe vs Olaplex: Which is More Effective for Hair?

Fibreplex vs Olaplex: Which is Better?

Olaplex is used by a lot of hair colorists across the globe. And it’s recommended by many salons because it’s effective.

In a study conducted with Olaplex and other products, Cureplex and Snaplex, Olaplex comes out better.

After 4 to 6 weeks of monitoring, the hair that Olaplex is applied to maintain a good, healthy state while others are shedding or degrading.

And it’s not tested on animals. This is good if you’re looking for a cruelty-free or vegan product.

In addition to all that, it doesn’t contain copolymers and oils which are present in Cureplex. These two ingredients can’t interlink disulfide bonds in the hair so might be a little shortcoming of Cureplex.

Olaplex comes in a very expensive kit that only a few salons or individuals can afford. The salon kit with 24 take-home treatment package is extremely expensive…it’s available at almost a thousand dollars at some point.

There are a couple of competing brands for Olaplex. This includes Cureplex and Fibreplex among others.

Fibreplex is a hairdressing technology that can help prevent hair bonds from breaking down during perming. It’s developed by Schwarzkopf as a direct competitor to Olaplex.

According to Schwarzkopf, Fibreplex is designed to stabilize the bond and is meant to be used during the coloring process.

The company stated that this bond enforcer is created with a technology that helps connect it to hair fibers and create an environment that allows a stronger bond structure.

The formula also enforces the bonds so they can go through the chemical process with a minimal breakout.

The formula equally contains magnesium citrate, which is responsible for maintaining the pH level of colored hair while stabilizing the internal structure of bonds.

What’s in the Box?

There are three products in the package:

Fibreplex technology is a two-step process The first one is where you mix the lighter liquid with water and cover the hair with it. This goes into the internal structure of the hair and activates balance in the cuticle and bonds.

The second step involved the use of a thicker and creamy liquid called Fibreplex 2. It doesn’t need to be mixed as the first because it’s stocky.

Don't Miss Out On These Related Posts:

1 thought on “Fibreplex vs Olaplex: The Battle of the Plexes”

Style-Hair-Magazine.com is a participant in the Amazon Services LLC Associates Program, an affiliate advertising program designed to provide a means for sites to earn advertising fees by advertising and linking to Amazon.com.