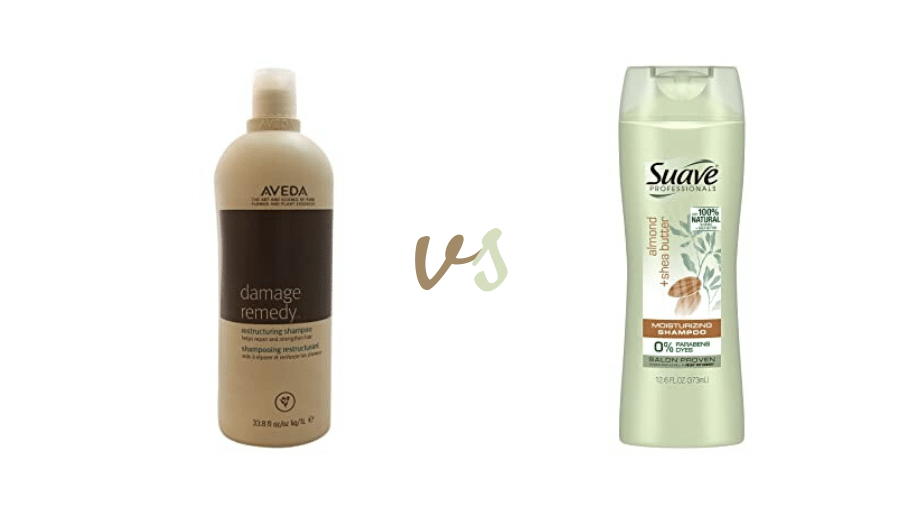 If you’re presented with Suave vs Aveda, which would you choose? Obviously, you likely don’t know since you’re reading this article.

The fact is that both brands are good. But where one is good, the other may not be up to the task. That’s what I want to unravel in this article.

This article is going to compare both brands based on how effective their products are. Not only that, but I’ll also touch on their downsides and whether or not you’re likely to face any side effects.

But before that, let’s take a look at some of the things you should have in mind when choosing.

Suave and Aveda are two different haircare brands. And each of them produces shampoos, conditioners, and many other hair care products.. They have other product lines but I’m going to focus on these two here.

Both of them are very similar, as they are made specifically with hair care in mind. For example, moisturize hair without damaging it in any way.

Despite this, the two products also have their differences.

The easiest way to determine the differences between them, as well as which one might be considered the “better product”, is to compare them based on their effectiveness and any side effects that they might have.

Price of Both Brands

Generally, Aveda products are much more expensive than those of Suave.

The Aveda Damage Remedy Intensive Treatment goes for almost 30 bucks, whereas a similar product from Suave is going to cost less. The only problem is that you may not be able to find a perfect replacement.

The Aveda Dry Remedy is even costlier while Suave Almond & Shea Butter shampoo and conditioner is less than 10 dollars.

I’d say go for Suave if you’re on a budget. But be aware that the result may not be as satisfying as using Aveda. So, it’s all about doing a trade-off somewhere. Which takes us to our next point, the effectiveness of their products.

The general opinion on the effectiveness of Suave appears to be mixed among consumers. There are some who consider it to be a great product. Saying that it makes their hair feel “lighter”, and that it makes it feel more healthy.

However, there are other reviews claiming that the product makes their hair feel greasy. And that it has a tendency to ruin curly or frizzy hair, making it tangled and difficult to manage.

There are also people who fall in the middle. These people consider it to be merely adequate, without a strong opinion either way. The opinions seem to be an even split in all three ways, with no one of them being more common than the others.

Aveda is one of the truly cruelty-free brands out there. This shows that the brand is dedicated to not just profit but also benefiting others and the environment.

No wonder some of their products like the Aveda Invati are some of the best sellers in hair care.

Although some of their products contain harsh chemicals, it’s generally assumed to be a safe and effective brand.

Some people also complain that Aveda may cause hair loss. But according to Healthline.com, the condition of your scalp and hair will determine how the ingredients in Aveda’s product affect it.

There isn’t solid evidence or study alleging Aveda to be unsafe. And many people still continue to use the brand.

Suave vs Aveda – Side Effects

Most of the side effects of Suave state that it has a tendency to damage their hair. And people on occasion have even reported that the shampoo gave them hair loss after multiple uses.

The overall view of Suave seems to be that while it is a fine shampoo for cleaning and moisturizing, the side effects have a tendency to outweigh the good qualities.

The common side effect of Aveda, as noted from consumer reports, is hair loss. If you have a sensitive scalp or soft/thin hair, you may want to avoid Aveda products that contain harsh chemicals.

Read labels carefully and make sure you fully understand what a product is about before using it.

As you can see, both Suave and Aveda differ on a lot of counts. It’s clear from the above that both are similar. However, one that I think might be better, and this is supported by consumers’ opinions, is Aveda.

One of the first reviews on this blog is one Aveda and many people seem to like them. To ensure you’re making the right decision, ensure you read further reviews from users so you feed your certainty to the brim.