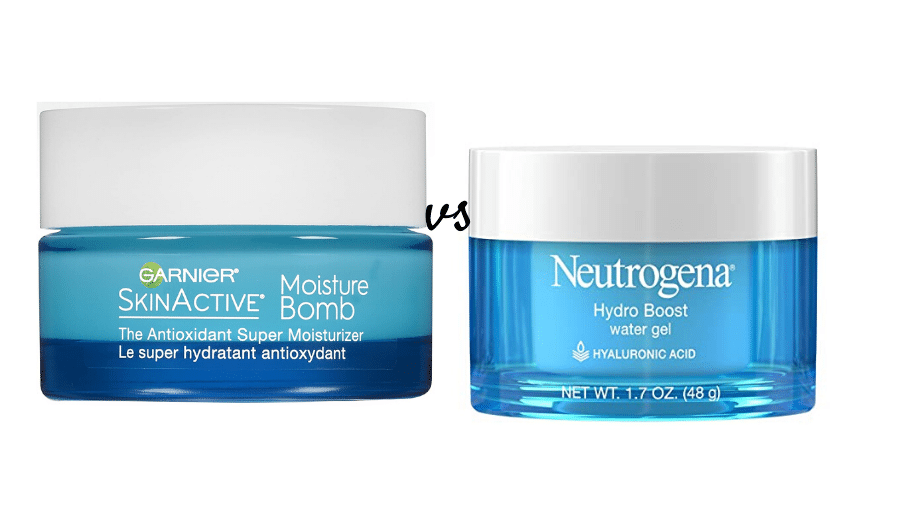 Do you want a comprehensive review of Garnier vs Neutrogena? You’re on the right page.

After scouring the internet for information on both brands, I found that there is little to no info about them. Even the two popular products, Hydro Boost Gel and Moisture Bomb from both brands have little coverage.

Fortunately, I’ve written a lot of comparison articles on different brands, especially around skin and haircare. So now, I’m going to give you a good review of both brands and how they fare.

After reading this article, you should be able to decide which brand is the most suitable for you. If you have any problem deciding, you can ask in the comment section and you’ll get answers to your question.

Garnier vs Neutrogena: How to Choose the Best

Whether you’re buying skincare or hair care products, you should not expect the same result from different brands. Also, while brand A may work for one person, it may not work at all for another.

That’s why you should have moderate expectations when buying. As long as you’re not looking for miracles, you’ll be able to decide if a product is truly great or not.

Also, when choosing, you should consider the reputation of the brand you’re buying from. Some brands are popular but they don’t have good products.

Lastly, try to learn as much as possible about the product you’re buying. Is it good for your skin type? Is it expensive, compared to a close alternative?

All of these things are important if you want to make an informed buying decision.

Garnier vs Neutrogena: History of Both Brands

A Background Info on Garnier

Garnier was launched in France in 1904 by the eponymous Alfred Amour Garnier.

Initially known as Laboratoires Garnier and focusing on hair care, the company’s first hit was La Lotion Garnier. This was set up a trend of incorporating natural ingredients, such as seeds, fruits, and flowers into their formulas.

Throughout its history, the use of these natural ingredients remained Garnier’s crucial selling point.

The company was also known for introducing innovative products to the cosmetics market, having pioneered sun care items and home hair dye in the 1960s.

With L’Oreal’s acquisition in the 1970s, Garnier expanded into skincare products. As of 1995, the brand has exploded in the international cosmetics market. And now, it’s currently sold in over 120 countries worldwide.

Now, you can find a lot of products for your skin from this brand at different pricing points. Whether you’re buying online or looking for an in-store purchase, you should be able to get your hands on decent products.

Founded in 1930 in Los Angeles, Neutrogena initially specialized in supplying cosmetics to the Hollywood film industry. This tinge of prestige would remain the company’s ticket to success for decades to come.

Their iconic glycerin-rich soap bar hit the shelves in the 1950s.

Priced midway between affordable and luxury products, the soap bar managed to stay above competitive supermarket price wars, cultivating an image of a high-quality product instead.

Eschewing traditional forms of marketing, such as magazine and television advertisements, the company opted for a more hands-on approach.

It was able to do this by delivering samples of its flagship product directly into the hands of its target demographics through dermatologists and luxury hotel chains.

Throughout the 1970s and 80s, Neutrogena would experience dramatic growth, introducing acne cleansing, as well as anti-aging products.

In the mid-90s, it was acquired by Johnson & Johnson and eventually established its presence in over 70 countries worldwide.

Garnier vs Neutrogena: Products from Both Brands

While personal preference certainly plays a part in determining how well a product delivers on its promises, sales figures provide some objective insight into the success of each brand.

Garnier is present in almost twice as many countries as Neutrogena, and, according to some metrics, boasts the title of the most trusted cosmetics brand in markets such as India and China.

However, Amazon’s bestseller list, Statista.com and Business Insider are all in agreement that Neutrogena not only has a distinct edge over Garnier when it comes to US sales.

But its various sub-brands have multiple entries in some charts, with Garnier products failing to chart altogether.

Garnier’s Micellar Cleansing Water, on the other hand, ranks lower. This shows the differences between their popularity and how much they’re selling.

Even in the hair care category, Neutrogena, perhaps surprisingly considering Garnier’s ubiquitous presence on drugstore shelves, does better on Amazon.

The Anti-Residue Shampoo, for example, is one of the top sellers in the category. Compared to the popular Garnier Fructis Pure Clean Shampoo which only manages to chart just below the fortieth position.

As both brands continue to evolve and compete for market share, one thing remains certain: Garnier and Neutrogena have been around for a century now, and it seems as though they won’t be going anywhere anytime soon.

Now, let’s look at two other products from both brands. These are skin care products and are quite popular.

Here, let’s look at some of the differences and similarities between these two products and which one might be more suitable for your skin.

First of all, the Moisture Bomb Gel is less expensive than the Hydro Boost. So, if you don’t have much to spend on your next product, I’ll recommend you go for the Garnier Bomb Gel.

However, the Neutrogena Hydro Boost Gel comes with fragrance, which is a great thing for those who love the fragrance to remain after application.

However, if you’re sensitive and get irritated by the scent/fragrance from this product, you can overlook this.

It’s important to note that one of these cannot be outrightly recommended over the other because of the diverse results people get from using both.

When you’re buying, it’s important to consider your skin type first, your budget, and then make a buying decision based on that.

Garnier and Neutrogena have been among the most recognizable brands on drugstore shelves for many decades now.

Neutrogena is best known for its skincare products, while Garnier boasts both skin and hair care lines. Both are part of multinational corporations.

Garnier is owned by the French cosmetics giant L’Oreal, while Neutrogena operates under USA-based Johnson&Johnson conglomerate.

Though they initially targeted different demographics, today both compete in mass-market affordable cosmetics, with Neutrogena products selling at a slightly steeper price point.