Looking for a side-by-side comparison of Olaplex vs Monat? You’re in the right place. Olaplex and Monat have been around for some time, which is why many people want to know which is better when we put them together.

Both brands are well-known for their lines that cater to damaged hair. While they are similar, many people do not have adequate information on both brands to help them make an informed buying decision.

Another thing some people don’t know is that. The fact that a company is popular doesn’t always translate to being reputable. 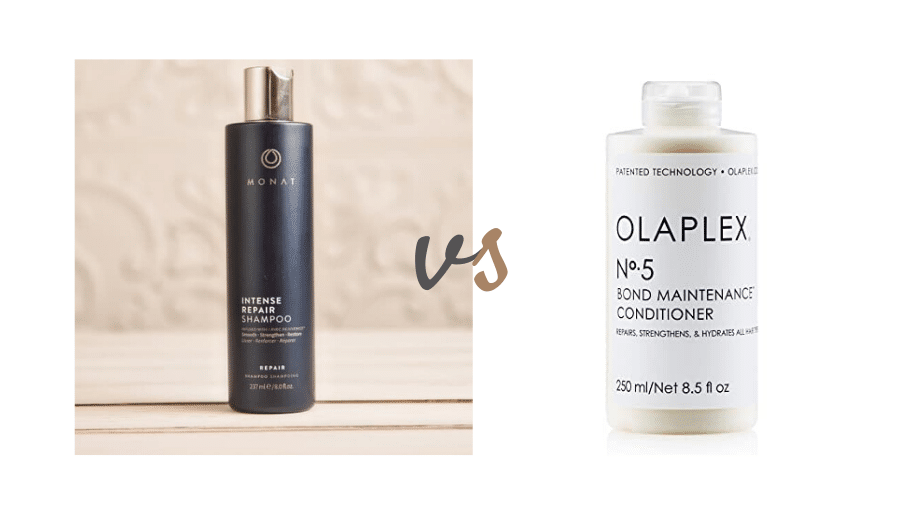 Some brands like L’Oreal, for example, are extremely popular, even outside their French provinces. However, that hasn’t stopped the brand from testing on animals. For that reason alone, I wouldn’t want to touch any of their product. But, many don’t know that.

The same thing applies to Monat and Olaplex. There are certain things that when you know them will affect the way you see both and whether you end up buying their products or not.

In this article, I’m not just going to compare both brands. I’m going to reveal some information that you should consider before going with any of them. This should help you before and after buying the product. Let’s start.

If you’re suffering from damaged hair, you want to choose the right product that’ll help you solve the issue. Even those who have luscious hair want to maintain or even improve it.

While there are a lot of brands to choose not all of them may be right for you. That’s why it’s always important to research the company you want to buy its product and select carefully.

Without that, you’ll not only end up with a bad product. But you’ll also be wasting your hard-earned money. Do not be despair though. There are quite a few brands you can choose from that are good and are worth your investment.

Comparison of Olaplex and Monat

Monat promises to repair damaged hair but Olaplex can help with improving hair growth. If you want to protect your hair from damages from chemical services, it’s good to choose Olaplex.

Monat can be used after the fact.

On another note, Monat claims the shampoos and conditioner can help strengthen your hair structure. But I’ll wager that Olaplex does better as it helps with hair follicle strength. Some are reporting that 35% of users witness this with Olaplex products.

To buy one now, here is a table with more info:

Click to Buy Olaplex Hair Perfector No 3
Buy from Amazon

Olaplex is one of the hair care brands that help you restore or repair damaged hair. If your hair has passed through chemical, thermal, or mechanical services, the bonds may have broken. Users claim it can keep the locks in place, strong and soft.

However, it’s not a miracle product. While it does reinforce and protect your hair, it may not suddenly turn severely damaged hair into glossy, full, and flowing. If you’re going to see that result, it’ll take time.

The product consists of a three-stage process. The first step is for repairing the broken bonds. Hair protection and damage prevention should also begin at this stage.

The second stage is where the rebuilding and fully restoring of the bonds. Step three is for use at home which is a watered-down version of the first two above. It’s designed to sustain the growth of your hair

The Monat Intense Repair Treatment is a similar treatment to the Olaplex Hair Perfect. However, it’s a daily leave-in treatment that draws into the hair and promotes the growth of thick, full-looking hair.

If you’re suffering from hair thinning or have experienced some damage to your hair, the Monat Repair Treatment promises a quick recovery. The treatment can be used daily and on colored-treated hair.

It’s equally easy to use and free from paraben, phthalates, etc.

As I said, Monat has a very expensive line. Olaplex is a lot cheaper. One of Monat’s popular products is Monat’s Rejuvenique, which was mentioned above and Revive Shampoo. Granted, the price has dropped and may be obtained for less than 70 dollars.

But when you compare with Olaplex Bond Maintenance Shampoo or Conditioner and even Bonding Oil from Olaplex, you’ll discover that Olaplex is a lot cheaper. You can get two of those Olaplex products for the price of one product from Monat.

And they both have comparable performance. Aside from the affordable price, I’ll recommend Olaplex over Monat as they have a cleaner profile.

The key ingredient in Monat is Capixyl, which is an ingredient that can prevent hair follicles from miniaturization.

This means that it can strengthen the hair and minimize loss by making the follicles stronger and thicker. It’s also claimed that it’ll stimulate growth in the scalp, which naturally affects hair growth.

The company tries to use natural ingredients in its product. So, you may not see any ingredients like paraben, sodium chloride, and other harmful substances in the ingredient list. The major ingredient in Olaplex, on the other hand, is Bis-aminopropyl. It’s a patented ingredient.

According to some sources, this helps in improving the protective barrier of the hair and makes their hair softer by attaching to the hair’s cuticle and softening it. It’s silicone but unlike others, it doesn’t lead to buildup on your scalp or hair.

Is there anything better than Olaplex?

While there are plenty of other hair bonders out there, Olaplex is still the best. Many others are tailing behind it. Although it may be expensive, many independent studies have found Olaplex to be more effective than similar bonders like Redken, Monat, etc.

Does Monat ruin your hair?

There have been reports from different users of Monat that the product indeed ruins their hair. This has resulted in the company being sued and lawsuits have been in court since 2018.

Which is the strongest Olaplex?

The No.2 Olaplex is claimed to be the strongest one in the range.

The latest versions are known to be built upon the No.2 Olaplex. However, it’s better to go with the current ones as manufacturers are known to add improvements in their recent products that may not be found in the previous ones.

Is Olaplex worth the money?

Yes, it’s worth the money. The reason is that a majority of the users have good things to say about the product. Unlike others, Olaplex has been found to result in longer hair, less frizz, less breakage, and few split ends.

Many also state that their hairs have become stronger and healthier when they started using Olaplex. It’s important to note that it’s not a happy case in all cases. This can be due to a faulty product, hair type, and the person using it.

There is also a professional and home-based version of the product. The professional one is often offered in salons. So, if you have the opportunity of getting it from the salon, you increase the chances of getting good results from using it.

Can you overuse Olaplex?

Olaplex, for instance, is not a product applicable daily. Using it daily can harm the hair. Using it weekly is manageable. So, get in the habit of checking the label on the product and following the instructions there.

Note that Olaplex 4 and 5 conditioners are formulated for daily use. So, your application may be dependent on the type of Olaplex you’re using.

If you’re looking for hair treatment for damaged hair, Monat seems to be a very good option. However, Olaplex also has a good line for that. At a cheaper price.

I’ll advise you to pick up Olaplex instead of Monat. Not only is the result you get from Olaplex fast, but you’ll also spend lesser than if you go with Monat.